I’ve had the lergy these past few days, a welcome gift from my sprog’s first week at nursery, so my evenings have consisted of light yoga in a mist of menthol crystals followed by early hours Tumblr scrolling whilst my nose streamed.

I like Tumblr, it holds the same ‘non thinking’ allure as those old stereoscopes I sometimes find kicking around my Grandparent’s cellar.

I’ve thrown buzz words (amassed from these AM trawling sessions) into conversations with young mums at the local playpark and sat back, amazed, as I’ve suddenly been deemed worthy of a twenty minute conversation rather than an “Uh-huh, yeah, mine does that too sometimes”.

In the predictable way that positive reinforcement often does, one success has lead to a growing obsession – an overwhelming desire to find more bandwagons to jump on…

That was how I stumbled upon the Fitblr community.

Having been an outpatient at a specialist eating disorder unit, fewer years ago than I would like to admit, I intially thought this movement (acting in opposition to Thinspiration and Pro-Ana websites) was fantastic. 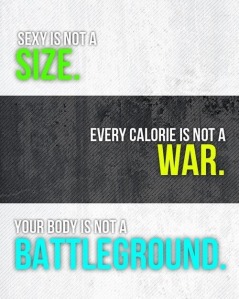 Pictures of muscular, gorgeous women abound alongside Instagrammed plates of nutritious food (coupled with positive affirmations and encouragement to eat).

Undeniably it’s also fitness focussed – the harder, heavier, sweatier the better seems to be the overwhelming message and as such brands like Nike and Reebok are already cashing in.

We’ll forgive them the corporate element though because at its core Fitblr is a large network of real, young people from all backgrounds and locations finding a common goal and high-fiving one another until every single member of that displaced, online ‘family’ reaches the Motherland (or some equally misty-eyed bollocks).

As the internet’s latest offering by way of a ‘diet plan’, because let’s not bullshit – if it contains food and exercise it’s a diet – it seems like a step in the right direction for combatting ED’s of all varieties. It’s just Sargeant Major shouty enough to get you off your arse but also gentle and supportive when you need it to be.

Then the rose tinted glasses came off, the sensible mummy head got screwed on and I dug a little too deep. 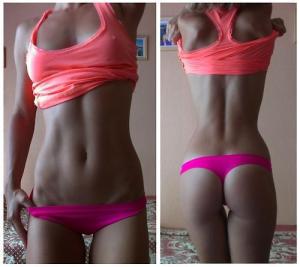 (Kudos, bearer of this bottom, I can’t credit you though because I Googled it).

Those nommy plates of fruit are balanced on impossibly ‘gappy’ legs, the toned beauties are sprouting killer abs from a concave stomach, every butt shot (of which there are many) is a perky little peach atop two twiglets…

The theory might be sound, the statistics actually science based and I’m not going to say exercise (in moderation) isn’t fucking mega but the poster girls are just as realistically unattainable as ever.

It’s part posture, a few photographer’s magic tricks, luck of the draw genetics and most likely a body fat percentage low enough to stop you menstruating that’ll get you that body – no amount of spinach smoothies and hill marathons can beat you out a new skeleton.

I can attest to that.

I’m 120lb. 5’6″ and practice yoga for twenty minutes every day whilst Frankie sleeps. I don’t own a car, I’m too skint for public transport and I chow down a lot of vegetables so I my son can afford to be a fussy eater.

You couldn’t pay me enough to exceed anything other than a brisk meander.

I’m fit, healthy and as skinny as I’m likely to get.

Mermaids dont have a thigh gap, why should I?

Covering everything from baking to beauty with a dash of bad parenting and a healthy dollop of humour.

Send me an email: mama_munster@hotmail.co.uk

What to expect when you're unexpectedly expecting.

for women who wobble but refuse to fall down

My Social Work journey... and other things

The trials and tribulations of a young mummy bee

At The Clothesline
Mummy Tries

a day in the life of my sketchbook...